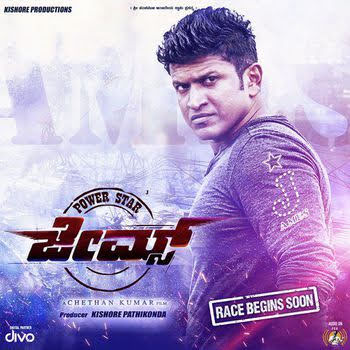 James is an Indian upcoming Kannada action movie written and directed by Chethan Kumar. The film stars Puneeth Rajkumar in the lead role. Female lead for the movie yet to be announced. The movie is produced by Kishore Pathikonda under the banner of Kishore Productions. Chethan Kumar has penned the lyrics as well. James Kannada movie will be releasing in 2021.

The film is being produced by Kishore Pathikonda under the banner Kishore Productions. The film started roll from 19 January 2020 in Bengaluru. The Second schedule of the film started from 14 October 2020 in Hampi. An intense schedule was also wrapped in February 2021 in Kashmir featuring important action sequences of Puneeth Rajkumar.[8] After returning from Kashmir, Puneeth became busy in the promotional activities of his other film, Yuvarathnaa which released on April 01, 2021 across the globe amidst the second wave of the corona pandemic. James team resumed shoot once again from July 5th at a brisk pace after the Government of Karnataka gave nod to restart filming activities.