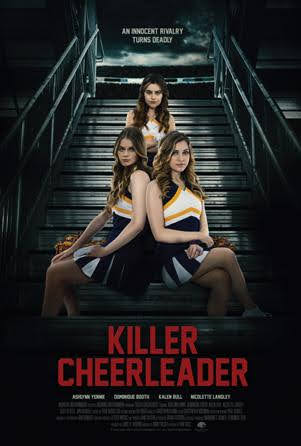 Dying to be a Cheerleader

Dying to be a Cheerleader (Killer Cheerleader) is a 2020 American TV movie, directed by Tom Shell and written by David Chester. Starring by Ashlynn Yennie, Dominique Booth, Kalen Bull, the film was released on October 3, 2020.

Synopsis: After her mother’s untimely death, Darcy (Dominique Booth) moves in with her aunt Cassandra (Ashlynn Yennie) for a fresh start. On her first day at a new school, Darcy watches the cheer team practice led by Taylor (Kalen Bull) and Taylor’s best friend, April (Nicolette Langley). The practice ends in a heated argument that causes one of the cheerleaders to break her ankle. Still, Darcy wants to try out but is stopped by Taylor, who becomes jealous after seeing Darcy with her jock boyfriend. April tries to convince Darcy to get on Taylor’s good side, but Darcy refuses to give in. The girls’ rivalry becomes the least of everyone’s concerns when one of the cheerleaders is found dead in the gym showers – and Darcy appears to be the one to blame. As deadly pranks, blackmail, and even murder begin to surround the school, will it all lead back to Darcy—or someone else?

Dying to be a Cheerleader Wiki:

‘Dying to be a Cheerleader‘ Cast Credits:

Trailer/ Teaser of Dying to be a Cheerleader:

‘Dying to be a Cheerleader‘ FAQ: